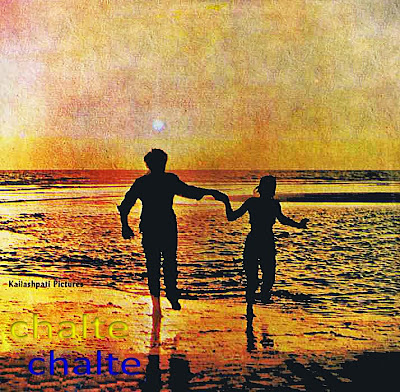 I know I watched this movie with my parents and young aunties (both my paternal and maternal aunts were staying with us for a few months then) at the Main Road cinema in Kuantan (Malaysia) and that both my aunts were pretty taken with the songs of the movie. Mind you, at this time, records were no longer the craze but rather those bulky 8 track tape cartridges (see picture below) and I can remember that both my aunts gave the tape deck quite a thumping. Who could blame them? Although I can’t for the life of me remember the movie (as I have not seen it again since that trip to the cinema), I will however, always remember the songs. It is just phenomenal. 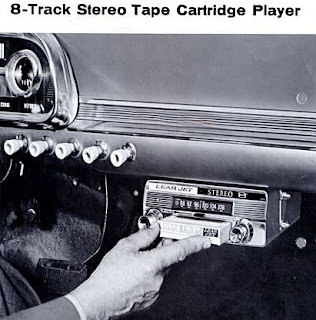 The music of Chalte Chalte (While Walking/While On The Journey) is by Bappi Lahiri and the lyrics are by Amit Khanna. This is one of Lahiri’s few ‘typical’ or ‘traditional’ Bollywood albums before venturing into his trademark ‘Bollywood Disco’ music. In addition, he also sang in this album, along with the legendary actor/singer Kishore Kumar, Lata Mangeshkar, Shailendra Singh (I love his voice!) and actress/singer Sulakshana Pandit. Still glowing from the success of the movie Zakhmee (1975), the songs of Chalte Chalte became the rage of 1976 and further cemented Bappi Lahiri as an aspiring Hindi composer and later as a legend in his own right.

My verdict: Five stars…..and my favourites - I love them all! Okay maybe ‘Pyar Mein Kabhi Kabhi’ more than the others. 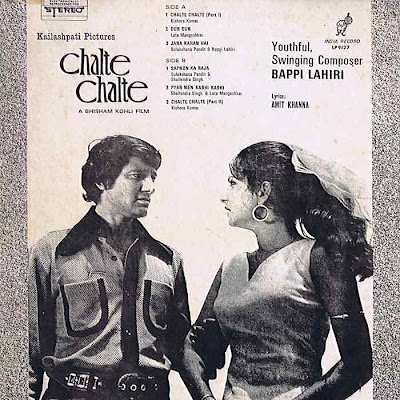 7 VIEWER/S HAD THEIR SAY. CLICK HERE TO ADD YOURS TOO!

There were some good songs. The title song was a hit song at the time. Also, JAANA KAHAAN HAI and PYAAR ME.N KABHI KABHI...
Vishal Anand it seems is a nephew of Dev Anand and no wonder he sometimes does ape him.

Kishore's rendition's of the title track (both versions) are absolute classics.

In the sad version you can really feel the pathos in his voice ...

The other songs are also very catchy & like you I've been listening to them for years via car cassettes etc.

Nasir saab, yes the title song was the rage of 1976 and the rest of the album was also much appreciated by the masses then.

AJ, you are correct, KK really brought the song Chalte Chalte alive; and Bappi was too right in his decision to get KK sing that song. Gosh I remember those bulky 8 tracks. My parents had quite a few of them. I have to admit that it was one fad I was glad to see go! Mind you, I wish I had kept some of the decks as bakelite material (remember the old black phones) is highly priced and collectable these days.

The cover looks different from the one I used to have - with a double jacket. This may be a later press or made for overseas market.

I can understand people wanting to try other songs. Even I would like to listen to the other songs than the classic title song rendered by Kishore - aptly described by AJ. It must have been "over exposed" in the last 35 years and hence the preference for the other rarely heard ones.

I think Chalte Chalte was based on a Hollywood movie - Play Misty for Me or some such. It was a total washout at the box office. Bappi's music being the only remeeding factor.

Hi Babu, my cover may seem different because it is a Malaysian pressing - with no gatefold. When I researched the net for info on Chalte Chalte, I noted that it was referred to as a box office flop but a musical success. Maybe that's why I can't remember the movie from my childhood!

Many Many Many Thanks for Jana kahan hai song. superb release!!! GOD bless you. :)

Veen
Australia
I enjoy English and Hindi music and movies from the 1950's to the 1970's. I have an ever growing collection of English, Hindi and Russian (yes Russsian) vinyls (over 5000 to date), hundreds of cds and cassettes and thousands of MP3s and DVDs which I am hoping to share with like minds. Most happy to take requests and will oblige if I have the media. Just drop me a line.

A Touch Of Bollywood Filmi and Gaana...

A Bit Of Everything...

The Australian Copyright Amendment Act 2006 allows copyrighted material to be used under the ‘fair dealing’ provisions of the Act without permission from the copyright owner for the purposes of research, criticism and reporting news.

This blog promotes the appreciation of out of production vinyl records. The author of this blog does not engage in buying and/or selling music in the form of vinyl records, CDs or MP3 format on this blog. Visitors of this blog are encouraged first and foremost to buy vinyl records (to maintain its posterity) and secondly, audio CDs or MP3 downloads from authorised music retailers. Any music that may be available here is meant for research, criticism, information and/or appreciation purposes only.

All photographs and written content featured at MY MUSIC MOVIE AND MUTTERINGS are by VG and may be sourced from copyright free sites and reference books unless otherwise stated. Please ask for permission before using any materials on this blog. If you are quoting from this site, please give credit and post a link back to this site. Please do not alter, transform or build upon any aspect of my work without prior consent.